On Monday 8th November 2021, the Provincial Grand Master Rt. W. Bro. John Lockley together with several Provincial officers attended Dieu-La-Cresse Lodge at Leek Masonic Hall to finally celebrate with the members and guests the centenary of the Lodge. The centenary was originally due to be held in November 2020, but due to the Covid Pandemic like most events and functions everything was placed on hold. 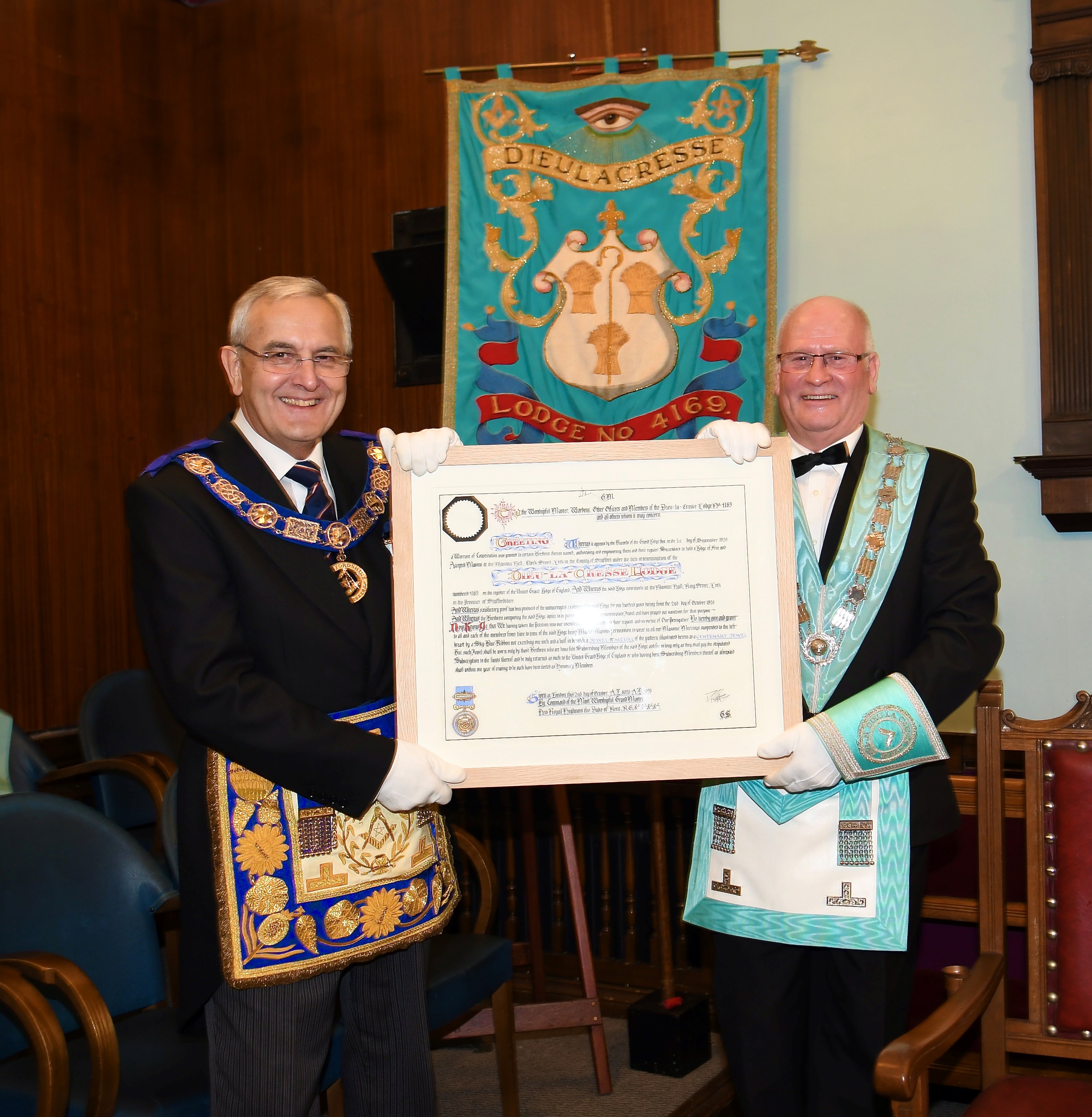 The Dieu-La-Cresse consecration meeting was held at 3.30pm on Saturday 2nd October 1920 at Leek Town Hall, followed by the Festive Board at the Black Swan Inn, Leek. The idea of a second Lodge at Leek is to be found in the minutes of St Edwards Lodge No: 966, their Worshipful Master at the time being W. Bro Chell. A petition was drawn up to form a new lodge and in May 1920, brethren from St Edwards Lodge signed a petition and Lord Dartmouth the Provincial Grand Master duly signed the recommendation.

At that time Leek was a very prosperous mill town and St Edwards Lodge had found that they had too many members, most being mill owners and Dieu-La-Cresse was thought to have been a Lodge for the mill workers. This is why, we have always met at 6.45pm in the evening, one of the latest meeting times in the Province. This allowed the workers time to go home, change out of their work clothes and attend the Lodge.

The name Dieu-La-Cresse comes from the Cistercian Abbey which was built in 1214 and located on the outskirts of Leek, the name in Norman French means “May God Prosper it”. The abbey, which was connected with St Edwards Church, was destroyed in 1538 by Henry VIII during the dissolution of the monasteries.

Also, that evening the Provincial Grand Master presented three Grand Lodge Certificates to Master Masons of the Lodge. The Lodge, which only has six active Past Masters has held several Emergency meetings recently and has a substantial number of brethren wearing light blue. This is unusual for a Lodge of our age but really encouraging, we also have candidates waiting.

A very enjoyable evening was had by all, both in the Lodge and at the Festive Board which was held at Westwood Golf Club due to the large numbers attending.

Whilst I was trying to compile this Lodge history, I was constantly being wished luck from brethren from beyond the grave! In a number of documents, I found the brethren referred to the 100-year celebration as far back as 50 years ago, wishing the Brother who would compile the history all the best of luck, as I do to the Brother who hopefully will compile our 200 year history!